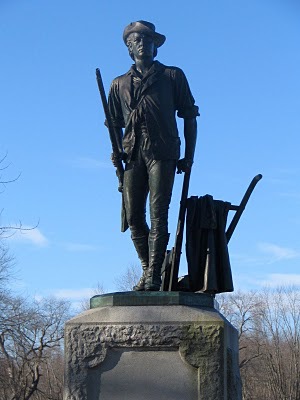 "I have not a man who is afraid to go." - Captain Isaac Davis

Lyn and I have lived in Acton, Massachusetts for a little more than seven years. I grew up in the Boston area, but I did not realize how important a role the Acton militia played in the events surrounding the beginning of the Revolutionary War. Every year on Patriots Day, the Acton Minutemen gather at the home of Isaac Davis and march the seven miles to the North Bridge in Concord to take part in the ceremonies there. We had intended to get up early this morning and go to the Davis homestead and to Acton Town Hall where there is a ceremony in honor of the four members of the Acton militia who laid down their lives in the morning hours of April 19, 1775, but when the alarm went off at 5:25 am I wasn't feeling up to it so we decided to wait another year. I had planned to write a blog today about Patriots Day, but then the day took a left turn.

Today, we witnessed an act of cowardice. We have seen them before and certainly today was not the last. There is no honor in devising a plan by which you ambush unsuspecting civilians who are gathered together to celebrate a historic sporting event. The Boston Marathon bears no tarnish as a result of what happened today near the finish line. Innocent people died today, slaughtered by a person, or persons, whose goal is to stain our history while attacking us in the present. They attacked us in the cradle of liberty, the birthplace of the War of Independence that gave the colonies their freedom. A revolution it should be noted that was not welcomed by all of the colonies.

In 1775, Isaac Davis was a 30 year old blacksmith and gunsmith. He lived with his wife, Hannah, and their four children in Acton, a town in the Massachusetts colony located approximately 30 miles northwest of Boston. The previous November, the men of Acton had created a militia and elected Davis as their captain. Davis trained the militia and outfitted them with bayonets and cartridge boxes to enable them to re-load quickly. They practiced their marksmenship and the Acton militia was considered one of the strongest and best trained in the colony.

Early on the morning of April 19, just before dawn, word spread to Acton that a unit of British Regulars was advancing from Boston. they were headed to Concord to find stores of weapons and munitions that they believed the colonists had amassed. The Acton militia gathered at Isaac Davis' home and prepared to march the seven miles to Concord. As the militia reached the border of Concord, Davis stopped them and offered any man who wished, the chance to return to his home. None did. The militia marched on and near the farm of Colonel James Barrett, commander of the Concord militia, the men of Acton left the road to avoid a group of British soldiers who were searching the Barrett farm. When the Acton militia arrived at the North Bridge, they joined miltias from several towns in the area totaling about 400 men. Initially, the position of the Acton militia would have placed them at the rear of the provincial force as they advanced. The company of the Concord militia commanded by Captain David Brown was located at the front of the force.

While a small contingent of the British force (approximately 90 men) was stationed opposing the provincial force at the North Bridge, most of the British Regulars were searching throughout Concord for weapons and munitions. While they didn't find the stockpile that they had believed  was there (sound familiar?), they did burn some wooden gun carriages. When the militias saw the smoke coming from town, they believed that the British were burning Concord and the decision was made to engage the British force positioned across the bridge. When Colonel Barrett asked Captain Brown if he was prepared to advance with his company, Captain Brown indicated that he was not. As the Acton militia was well equipped, Colonel Barrett asked Isaac Davis if he would take the lead with the men from Acton. Davis' actual words are lost to time, but he is reported to have said "I have not a man who is afraid to go." As the militias approached the bridge, The British Regulars opened fire and Capt. Davis, Private Abner Hosmer, and the company's fifer Luther Blanchard were killed. the provincial forces returned fire and the British force retreated to Concord. From there the British Regulars marched back to Boston with the provincial forces attacking them from the woods along the road.

There is a prideful saying here in town that goes something like "The battle of Lexington, fought at Concord, by the men of Acton." Captain Isaac Davis was the first commissioned officer to die in defense of the Republic. It is no small irony that today Massachusetts is tagged as one of the most liberal states in the Union (and the inference is that this is not a good thing) when at the time, most of the other colonies, especially the southern colonies were upset that the militias of Massachusetts had engaged the British forces.

The men that came to the North Bridge that morning came with honor. Both the British and the Colonists. There is a plaque on the east side of the bridge where the British force stood that memorializes two of the three British Regulars that died during the battle. The men of the provincial force are honored by Daniel Chester French's statue, Minute Man, which stands on the west side of the river and was dedicated in 1875. On it's base is inscribed the first stanza of "Concord Hymn" by Ralph Waldo Emerson.
By the rude bridge that arched the flood,
Their flag to April's breeze unfurled,
Here once the embattled farmers stood
And fired the shot heard round the world.

Today we watched another surreal event unfold before us as an yet nameless, faceless entity attacked killing at least three people as of this writing, including an eight year old boy, and seriously wounding at least 140 others. The media is alight as they have converged on Boston in search of the story, which is being wrung out in real time on TV and the internet. The reporters seem to be particularly fixated on the types of injuries that occur with a device like the one used this afternoon that produces a spray of shrapnel in hopes of inflicting as much damage as possible.

Many lives have been changed today. None for the better. Families will grieve those that they have lost, console and comfort those who are injured and there will be reactions among us from righteous indignation to attempts at understanding, and in the coming days, someone will be brought before us as the evil behind it all. The one real truth is that someone woke up this morning knowing that their plan for today was to instill fear, create chaos, destroy lives and inflict pain and suffering on a group of people who per chance happened to be in the wrong place at the wrong time. There will be no plaque to honor those responsible.

Our country is not perfect. We have done things that are not honorable in the past and most certainly will do so again, but there is nothing in our experience that makes what happened today ok. there is nothing that justifies what the victims of this bombing are going through.

Peace be with you.