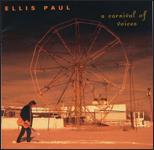 This was all about being in the right place at the right time.  I was in the studio while Jennifer Kimball and Patty Griffin were recording their vocal parts for this album and Paul decided to have a crowd scene in the background on "Midnight Strikes to Soon."  The four of us recorded multiple tracks of backing vocals and nonsense chatter, which was quite entertaining on its own.
The Players:
Ellis Paul vocals, acoustic guitar, and harmonica noodlin'
Bill Dillon high strung, 12 string and electric guitars, bass guitar on "Midnight Strikes Too Soon," guitarorgan, and Vox piano on "Weightless"
Jerry Marotta drums and percussion, bass guitar on "Change," piano tinkler on "Ball Is Tumbling Down" and "Lay Your Wager Down," inspirational vocals on "Paris In A Day" and "Deliver Me"
Tony Levin upright, fretless and fretted bass
Duke Levine baritone and electric guitar on "Lay Your Wager Down," additional electric riffage on "Deliver Me" and "The Ball Is Coming Down"
Harvey Jones piano on "Deliver Me"
Patty Griffin background vocals and the pumpkin-mice speech
Jennifer Kimball background vocals on "Weightless"
Stuart Ferguson mob scene harmonies

Work with other Artists/Performers